It is not unreasonable to estimate that his signature count is in the millions.

When Arnold Palmer applies his pen to anything he is asked to sign, whether it be a formal document or one of the wide variety of items his fans put in front of him, nobody needs to puzzle over the writer’s identity later on. He took a great amount of pride in legibility and an equally-large amount of umbrage about the illegible scrawls that many of today’s golf pros and other athletes scribble on items of their admirers. In fact, he was quite vocal about the matter and has convinced many of them to follow suit.

“What’s the point of signing something if the person can’t read it or later can’t even remember who it was,” he reasons.

“What’s the point of signing something if the person can’t read it or later can’t even remember who it was,” he reasons.

Arnold has signed his name in abundance for close to 70 years and, although there is no way to verify it, it is believed that he has penned his name more often than any athlete in any sport in history. It is not unreasonable to estimate that his count is in the millions. The numbers never slowed down with Arnold’s departure from tournament golf or as he got older. The immensely-popular Golf Channel documentary in 2014 spawned a tremendous number of complimentary letters from fans and, in turn, thank-you notes signed by Arnold, who makes every effort to respond to his mail. 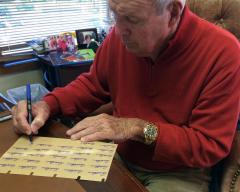 Golfers are more accessible to their fans than star athletes in other sports and most of them, like Arnie, are more willing to take the time for autographing. No matter the target. Arnold has sketched his name on just about every decent place on the human body and on such inanimate objects as the dashboard of a few new cars, the hood of a tractor that matched the one he made famous in television ads, an old airplane propeller and a small fortune of paper money, to cite a few instances.

Arnold’s signature, coupled with his equally familiar umbrella logo, adorns his licensed products on the market, notably on the hundreds of millions of cans and bottles of Arnold Palmer beverages coming off the bottling lines each year. Widely used throughout Asia, too, the familiar signature is a part of every company logo in his business enterprise, including the Arnold Palmer Invitational Presented by MasterCard, the PGA TOUR’s important stop at the Bay Hill Club & Lodge in Orlando, Florida.

What’s most remarkable is that, despite it all, Arnie never wound up with a permanent case of writer’s cramp.